And let's stay in Iowa. It was only a few decades ago that railroad tracks laced the state's countryside, linking even the smallest Iowa communities to the rest of the country. Many of these short line railroads have been disappearing. They're being turned into farm land or in some cases, bicycle trails. But in one Iowa community, farmers and businessmen are using their own money to preserve their railroad connection. They see it as an economic lifeline.

(SOUNDBITE OF LOCOMOTIVE ENGINE AND WHISTLE)

AMY HOMAN: The community has been spectacular. The people there are excited to have us back in the area and they love seeing our engines going up and down that line.

BORG: That's Northern Railroad's Amy Homan. Iowa Northern is partnering with some farmers and business interests here who bought nearly 30 miles of rail track that was being abandoned by the Union Pacific Railroad. Short line tracks, like this one, are being idled across the country as railroads concentrate on longer trains.

But North Iowa farmers and business interests didn't want to lose their rail connection to the outside world. To Forest City Co-op Elevator Manager, Randy Broesder, keeping trains is a matter of survival.

RANDY BROESDER: People know if the rail leaves it never comes back, and they've seen a lot of it happen in the area because we've had other tracks that the lands went back to the farmer and you know there's not going to be another track there. And you look at neighboring elevators that used to be good size, they just don't have many employees anymore because they don't do a lot.

BORG: So Forest City and Garner grain elevators, along with farmers and manufacturer Winnebago Industries, pooled their money to buy the 28-miles of railroad the Union Pacific was selling for $1.5 million.

HOMAN: It's a small group but it's a group that wanted to see the rail survive.

BROESDER: If we lose our local ethanol market, which is Hanlontown, which is a small plant of 50,000 bushels a day is what they're grinding, they're going to be about the first one to go down, and we need somebody that's got a big appetite for a couple of hundred thousand bushels.

BORG: The big appetite is ADM's huge corn processing plant in Cedar Rapids, nearly 200 miles away. Just buying 28 miles of rail track provides the connection to another rail line leading to ADM. That's the business plan for maintaining markets; shipping corn half-way across the state by rail at about the same cost as by truck to nearby ethanol plants.

BROESDER: Long term, you need to look at the freight rates. We can go a lot further with train, a lot more efficient.

BORG: Iowa Governor Terry Branstad, who rode in the Iowa Northern locomotive through a ceremonial ribbon, calls the rail purchase a win-win.

GOVERNOR TERRY BRANSTAD: They're shipping train loads of grain from both Forest City and Garner to ADM and, of course, that's increased the price of corn in that region and it's also given ADM another supply of corn.

BORG: Along with the Iowa Northern's Amy Homan, I climb into a huge, black locomotive in Garner, Iowa.

HOMAN: We currently have five UAN fertilizer cars - loaded cars in our train - and 25 empty grain hoppers that we'll be taking up to Forest City.

BORG: The 11 mile ride to Forest City will take an hour and a half. Because of track conditions, the engineer is holding the throttle at 10 miles an hour. But for the Iowa Northern, this is a track that leads to grain needing a market.

HOMAN: Grain is our primary business, and so this line made sense for us...

HOMAN: ...because of that huge volume of grain potential that's there.

BORG: And there's a worst scenario plan. Investors say they can always recover their money by selling the 28 miles of track as scrap steel. 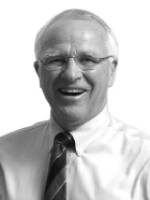 Dean Borg
Dean Borg is an Iowa City based correspondent for Iowa Public Radio. He joined IPR in 2000, but his broadcast news career began at WOI Radio as an Iowa State University student. Later in Cedar Rapids, he led a 32-person news, sports, weather and farm radio and television staff for The WMT Stations. His experience includes daily coverage of the Iowa General Assembly, news and documentary reports from South Vietnam and the Paris Peace Talks, moderating nationally televised presidential candidate debates, and interviewing every President since John F. Kennedy.
See stories by Dean Borg