Shortly after Buffalo’s curfew started Thursday evening, city police and State Police swept through the area of Niagara Square directly in front of City Hall to clear the area where a protest was finishing. An unidentified, 75-year-old man was shoved by two officers wearing tactical gear. The man lost his balance and fell to the pavement, audibly hitting his head with blood running out from under his head.

Two medics came forward and treated the victim. They helped put him in an ambulance and he was taken away. The man, Martin Gugino of Amherst, is in serious, but stable condition at ECMC, reportedly with a concussion and lacerations. Erie County Executive Mark Poloncarz said based on the information he was given, the man is expected to recover. On Friday morning, Poloncarz updated his status as being "alert and oriented."

In the video, several officers are seen walking past Gugino as he lay bleeding on the ground. At one point an officer begins to attempt to to help him, but another officer grabs him to keep him moving. An image captured on social media moments earlier showed the manreturning a helmetto an officer. Officers are heard shouting "push him back" when the shove occurs.

A Buffalo Police spokesman issued a statement at 8:50 p.m. Thursday saying "a 5th person was arrested during a skirmish with other protestors and also charged with disorderly conduct. During that skirmish involving protestors, one person was injured when he tripped & fell."

WBFO posted video of the incident on Twitter at 9:13 p.m. Following that posting, department officials said a full Internal Affairs investigation was underway and that Police Commissioner Byron Lockwood had ordered the immediate suspension of the two officers involved, without pay. The officers have not been formally identified, but the name plate of one is visible in the video.

Buffalo Mayor Byron Brown issued the following statement at 11:05 p.m., saying he was "deeply disturbed by the video":

“Tonight, after a physical altercation between two separate groups of protesters participating in an illegal demonstration beyond the curfew, two Buffalo Police officers knocked down a 75-year-old man. The victim is in stable but serious condition at ECMC. I was deeply disturbed by the video, as was Buffalo Police Commissioner Byron Lockwood. He directed an immediate investigation into the matter, and the two officers have been suspended without pay. After days of peaceful protests and several meetings between myself, Police leadership and members of the community, tonight’s event is disheartening. I hope to continue to build on the progress we have achieved as we work together to address racial injustice and inequity in the City of Buffalo. My thoughts are with the victim tonight.”

This incident is wholly unjustified and utterly disgraceful.

I've spoken with Buffalo @MayorByronBrown and we agree that the officers involved should be immediately suspended pending a formal investigation.

The New York Attorney General's Office said, on Twitter, it is aware of the video, which quickly went viral Thursday evening, attracting national and international attention. As of Friday morning, it had more than 56 million views on Twitter, more than 10,000 comments, nearly 60,000 retweets and more than 82,000 likes. At 6 p.m. Friday, it had been viewed more than 71 million times on Twitter.

The Erie County District Attorney’s Office issued a statement Friday morning, saying it continues to investigate the incident. The DA's office says the victim was "unable to provide a statement to investigators last night."New York Civil Liberties Union, in a statement, said "the casual cruelty demonstrated by Buffalo police officers tonight is gut-wrenching and unacceptable." Buffalo Chapter Director John Curr added, "We are in solidarity with Buffalo’s protesters and demand that demonstrators can protest without the threat of police brutality on the streets tomorrow."

"Simply put, the officers must be held responsible for their actions, not just fired," said Poloncarz, in a tweet.

"The video was deeply disturbing and the actions taken were wrong. We need a prompt investigation and full accountability," said U.S. Sen. Charles Schumer (D), in a statement.

Gugino is a longtime activist with PUSH Buffalo. The group issued a statement Friday saying it is "shocked" by the incident and calling Gugino "a tireless fighter against injustice of all types for many years." The group is calling for "an immediate de-escalation of police aggression in Buffalo," an end to local curfews, and defunding of the police department.

Protests over the killing of George Floyd, a Black man, by a white police officer who kneeled on his neck for nearly nine minutes in Minneapolis last week, have been taking place in Buffalo since last Saturday. They have been peaceful at times and tense at other times, with most demonstrations starting in Niagara Square, often progressing into marches through city streets.

The most serious resulting incident came when a vehicle ran into three law enforcers on Bailey Avenue on Monday night, causing injuries to a state trooper. The driver of the vehicle was not involved in that protest and has been charged with multiple felonies, including aggravated assault on a police officer and criminal possession of a weapon.

Eighteen people were arrested last weekend, including one man charged with throwing a flaming object through a broken City Hall window. Additional arrests have been made at protests throughout the week.

Thursday's protest lasted several hours, beginning in the afternoon. It became tense at one point when a standoff occurred between police and protesters, but ended peacefully with the crowd dispersing. The shoving of the man in the video came after most of the protesters had left, around the time of the city's 8 p.m. curfew. Four people were arrested on disorderly conduct charges for blocking traffic in Niagara Square during the protest.

Mayor Brown, in an afternoon news conference, announced a ban on the use of chokeholds on police suspects. Earlier in the week, he called a citywide curfew from 8 p.m. to 5 a.m. through Sunday. Also on Thursday, Buffalo's Common Council voted to fully fund the police department in the city's budget proposal, despite calls to defund.

(This story is developing and will be updated.) 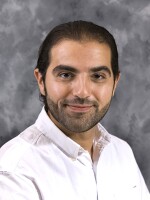