The backlash over the use of vaping products continues as the number of people being diagnosed with vaping-related lung illnesses continues to climb. After New York banned the sale of flavored e-cigarettes last week, Massachusetts this week banned all vaping products for four months, and Juul announced its CEO would step down and the company would stop all advertising in the U.S.

But vape shop owners say the bans are misguided, and will only result in shops closing and removing access to what they believe are a safer alternative to cigarettes. Ryan Cornelius owns the Vape Asylum in Oswego, N.Y., and spoke with WRVO's Mark Lavonier.

What would you say are the drawbacks of vaping?

Obviously, with the youth use up, I do believe that’s a drawback to it. JUUL seems to be a really big thing with the younger kids and the higher nicotines. I do agree that we have a problem with the youth use and it does need to come down. You know, I have kids come in and they try to look around, and we always ID as they come through the door. And usually we can pick an underage kid out, and then we just politely ask them to leave, you know? We can’t help you today.

During the recent public hearing on the flavor ban there was many success stories of moving from smoking to vaping. From a woman who was able to recover and manage her emphysema, to decades-long smokers saying that nothing else truly helped them quit cigarettes. What kinds of stories are you hearing here in the shop?

I had this lady that comes in that’s probably 72, 73 years old. She’s tried everything on the market multiple times. She says that she hasn’t had a single day without a cigarette until she found vaping, and that’s quite an incredible story. And that’s just one of the many. These people are panicking, you know. You’re about to take the lifeline that they have away from them.

Some customers have said the flavors are a sort of lifeline for them. Why?

I think flavors are what really transition people away from the cigarettes, you know? A lot of people come in and they want to start with the tobacco flavor, and usually they will get a quarter of the way into that bottle and they don’t want it anymore. They don’t want to taste tobacco anymore. They’ve tasted it for 20, 30 years, and I believe the flavors are a huge part of getting these people to make the switch.

Many vape shops are either preparing to close or are closing as the momentum has picked up with a lot of the anti-vaping messaging and regulation. What are your plans?

I’m going to plan to stay open, and we are going to follow the law, and we’re hoping for something to change in the mean time. I’ve been in this industry a long time and I really don’t want to go back to doing something different. I really enjoy dealing with the people. I enjoy the success stories from them. I’m helping people and I enjoy doing that. For years we’ve watched people around us die from smoking related illnesses. You know, we’ve buried our mothers and our grandfathers and our grandmothers, and everybody’s lost somebody. We believe this is our solution to the problem.

What about the messaging you heard about vaping nicotine and THC?

My customers are definitely concerned about this. As the time has gone on, people are starting to read through these studies and they’re starting to find the truth themselves. But the news is not doing us any justice at all on it, you know. They’re lumping us in with the THC carts, and that’s where our issues have been from. We have a long history of traditional e-liquid, and I think the people speak for themselves on it. A lot of people have been vaping a long time.

Do you think there have been any flaws in the messaging about vaping from other advocates?

I really don’t. Our advocates do a great job, and I hope the vaping prevails. And I hope that the American people see, nobody was really giving us a real solution. Chantix has suicidal thoughts and all of these other things, patches work for some people, but not all. And that’s great for the people it does work for, but we’re a group of people that it didn’t work for, and we just want something that does work for us. We’re adults, we should have our right to choose. 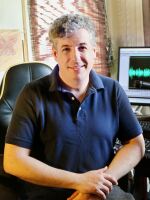 Mark Lavonier
Mark is the local host of "All Things Considered" weekdays. He's also the host and producer of "Tuned to Yesterday" which showcases shows and stories from radio's golden age.
See stories by Mark Lavonier