Elections
21st Congressional District
New York's 21st Congressional District includes all of Clinton, Franklin, St. Lawrence, Jefferson, Lewis, Hamilton, Essex, Warren, Washington and Fulton counties and parts of Saratoga and Herkimer counties.0000017a-3c50-d913-abfe-bd54a8740000The incumbent is Elise Stefanik (R-Willsboro). Stefanik was first elected in 2014 -- in which she made history by becoming the youngest woman in the House -- by defeating Democrat Aaron Woolf 53-32 percent.Other declared candidates in the 2016 race for the seat include Mike Derrick (D), retired Army colonel; and Matt Funiciello (G).

The poll was conducted independent of the candidates by WWNY-TV 7 News in Watertown and Siena College. It has a four point margin of error.

The poll also finds North Country voters deeply dissatisfied with their state and federal leaders, with more than 10 percent of voters saying they're unsure how to vote.

Stefanik communication director Lenny Alcivar released a statement about the poll saying it appears her message has "resonated with voters across New York's 21st District." "Elise will continue her campaign's focus on meeting with voters and on communicating her common sense, positive vision," he added.

In a statement released Wednesday afternoon, Woolf argued, "My momentum is building. I will continue to work hard to talk with as many voter as I can about ways we can work together to create jobs, grow the middle class and boost the North Country's economy," he said.

Funiciello expressed delight that his third-party candidacy has drawn attention. "It's an affirmation that I am not only doing something that is important, but something the voters are embracing."

With less than two months until Election Day, this snapshot shows Stefanik as the front runner in a race that’s still competitive. 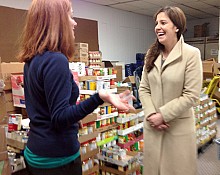 The 30-year-old former policy analyst for Congressman Paul Ryan and the George W. Bush White House is viewed favorably by 44 percent of those polled, including 40 percent of independents. That compares with a 32 percent favorability for documentary filmmaker Democrat Aaron Woolf, and 18 percent for bakery owner and Green party candidate Matt Funiciello.

Poll respondents said Stefanik would do a better job in Congress on a range of issues, from jobs and health care to immigration and war in the Middle East. Stefanik has been campaigning hard since last summer, visiting businesses and local groups and leaders across the sprawling 21st District. It appears to be paying off.

Ray Scollin, Franklin County Republican committee chairman and a Stefanik supporter, said her approach has been to get out and meet voters. "I think she has a longer ground game of doing that than what we’ve seen from the other two candidates," Scollin said. "She’s been out there and trying to listen and talk to the voters."

The poll suggests serious vulnerability for Woolf, a long-time seasonal resident of Elizabethtown in Essex County, and an award-winning documentary film-maker.

The poll suggests serious vulnerability for Woolf, a long-time seasonal resident of Elizabethtown in Essex County, and an award-winning documentary film-maker. 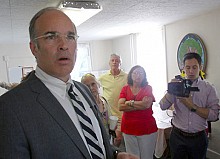 But with two months before election day, he remains close enough to mount a serious challenge, with Stefanik still drawing fewer than 50 percent of district voters.

Saranac Lake Mayor Clyde Rabideau, a Democrat and a Woolf supporter, said Wednesday it has helped Woolf to be introduced to voters by current Rep. Owens. But Rabideau said Woolf now needs to step out and make his own case. "People have to know who they're voting for. They can't rely on the stature that Bill Owens had," Rabideau said.  "Aaron Woolf's got to show his own character to the people of the North Country."

Another big take-away from this survey is the clear impact of Green Party candidate Matt Funiciello's campaign on Democrat Aaron Woolf. 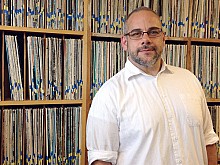 The poll found Woolf is drawing support from only 56 percent of registered Democrats, with a whopping 15 percent of Democrats peeling away to support Funiciello.

In an interview Wednesday, Funiciello expressed delight with the results, suggesting that as more voters learn about him his appeal will grow. Funiciello also criticized Woolf as an establishment candidate. "Woolf is not going to represent a higher or living wage for people who live in this district. It's not going to represent the death of fracking. He's not making any principled stands at all."

In the past Funiciello has rejected assertions he might be viewed as a "spoiler" candidate, drawing away liberal or progressive support while having little chance of winning the seat. On Wednesday he again called that idea "propaganda" and urged Woolf to drop out.

Funiciello also acknowledged that his full-time job as a baker won't allow him to campaign full-time in the final weeks of the campaign. "My primary focus is working fifty hours a week," he said.  "I don't have the leisure time that the other candidates do."

Rep. Bill Owens, a Democrat from Plattsburgh, put this race in motion in January when he shocked the North Country political world and announced he would not seek re-election after his third term in Congress. None of the candidates who jumped into the race are known political entities. Stefanik and Woolf moved to their families' summer homes in Essex County about a year ago to establish residency in the district. Neither has run for public office before.

Funiciello was born here and has owned Rock Hill Bakehouse and Café in the Glens Falls area for two decades. But he’s a political rookie, with little name recognition outside the Queensbury area.

Stefanik seems to have made big gains on this front, emerging from a hard-fought and much publicized primary against Matt Doheny with better name recognition. Just 28 percent of respondents said they didn’t know her.

Tough climate for a Democrat

But reinforcing the notion this could be a tough mid-term for Democrats, the poll found 60 percent of respondents view President Barack Obama unfavorably.

Just over half see Governor Andrew Cuomo unfavorably. But in a head-to-head, Cuomo still leads Republican challenger for Governor Rob Astorino, 44 to 35 percent.

A lot can happen in the last seven weeks of campaigning until Election Day on November 4. The shape of the race could change dramatically over the course of three scheduled debates in October.

According to the poll, 11 percent of potential voters are still undecided.